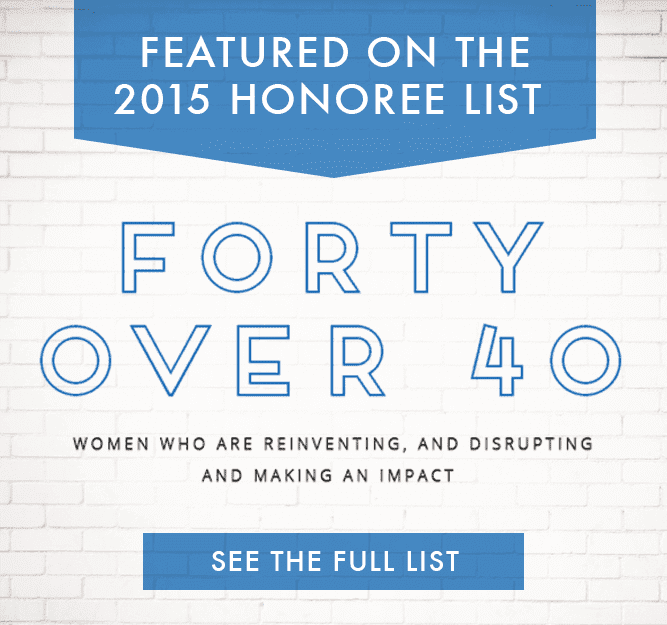 Normally I open these posts with a little bit of chit-chat about my week, or something the team is doing, but this week the news is too big to hold!

Earlier this week the Forty Over 40 list came out, and not only did our very own Becky Robinson make the list this year, but so did a name you should be familiar with if you’ve been involved with our spring book launches: Cheryl Bachelder!

The team is very excited for all of the Honorees, but we are doing an extra {Happy Dance} over the inclusion of Cheryl and Becky.

The 40 Women To Watch Over 40 list celebrates women who are upending the perception that 40 is past your prime. They are reinventing, leaning in, and creating momentum that will be felt by those beyond their community and field of work.

Forty Women to Watch over 40 was created by Christina Vuleta and Whitney Johnson to bring awareness to the reality that innovation gets even better with age.

Christina, creator of 40:20 Vision, a cross-generational mentoring platform and Whitney, speaker, investor and author of Dare, Dream, Do [and the forthcoming book, Disrupt Yourself – Join the Team | FREE July 21 Webinar], both share the conviction that women in their forties and onwards reach new levels of creativity, clarity and confidence.

In addition to Becky Robinson (as the Founder of Weaving Influence), and Cheryl Bachelder (as the CEO of  Popeye’s Louisiana Kitchen), you’ll also find a producer, a teacher, a photographer, and a comedian, as well as numerous CEOs, entrepreneurs, authors, activists, sports enthusiasts, and more.

If you are looking for inspiring and influential women to follow and learn from, you’ll want to spend some time scrolling through the 2015 Honorees.

Will you join me – and the Weaving Influence Team – in congratulating both Becky and Cheryl on this honor and wishing them continued success? Send this Tweet Now and then spend some time getting to know the other Honorees. Happy Friday!