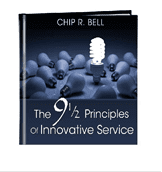 To celebrate the launch of Chip Bell’s new book, The 9 1/2 Principles of Innovative Service, we are honored to host a guest post from the man of the hour. If you want to know more about Chip, he was featured on an earlier Friday post, which you can read here. Take it away, Chip!

The End of Customer Innocence

The day in 1941 when planes from Japan dropped bombs on Pearl Harbor in Hawaii, has been called the end of innocence for the United States.   We had never had an attack on our soil from a foreign country since becoming a country.  That day of infamy was an attack on our soul.  And, we went to war to protect it.

While clearly not on the same emotional plain as a war-starting incident, the customer has had a version of an attack on what was historically a key feature of exceeding customer expectations—the element of real surprise. There was a time when a front desk clerk, rental car agent, airline gate attendant, merchant or waiter enchanted us with an unanticipated value-added something.  It had a neighborly, old-fashioned feeling when we got an extra.  The mechanic fixed something broken while servicing our vehicle and wrote “no charge” on the invoice.  We heard words like, “It’s on the house” or “we’ll comp it!”

Then, the world of unexpected extras pretty much came to an end.  Easily blamed on the tough economy, the shift was more subtle.  Extras were not actually taken away, they were managed away.  The extremes of a “no variance” philosophy from TQM and Six Sigma got pushed way beyond its rank and pay grade requiring the frontline to hand over their spontaneous generosity to the computer.  Now, the computer, not the gate agent, decides if you get that first class seat upgrade based on your frequent flyer status and seat availability.

And, the customer, robbed of that Jack-in-the-box feeling of surprise, has simply built the expectation of an extra into their criteria for satisfaction much like the cleanliness of a hospital or the security of a bank.  Value-added has become value-assumed and no longer a loyalty-creating value at all.  Proof that it has become a given, not an extra, is how easily the customer is disappointed when he or she fails to get what was once presented as a true surprise.

It is time to bring back the trust and authority the frontline needs to be both generous and ingenious.  If the Ritz-Carlton can trust a housekeeper to responsibly spend up to $2000 to make sure a guest leaves happy, the waiter can be trusted with the decision to a dessert for a loyal customer. Employees who can successfully manage a family budget, juggle soccer, tutoring and baseball practice schedules, and shop for groceries can figure out ways to surprise customers without jeopardizing the unit standards or the bottom line.

Returning customers to a feeling of innocence requires bringing back a setting lined in trust; place filled with joyful innovation.  It takes leaders who are as courageous as they want their employees to be creative. It calls for leaders in search of invention, not obedience.

About Chip Bell: Chip R. Bell is a highly sought after keynote speaker and the author of several best-selling books.  His newest book is The 9 1/2 Principles of Innovative Service, available on Simple Truths. You can connect with Chip through his website or via Twitter or Facebook.

Share Your Thoughts! Are you a courageous and inventive leader? Have you ever experienced “surprise” service that made you want to tell others about it?