Late in 2013, a large box arrived on the doorsteps of several Weaving Influence team members, myself included. Within the box we found a thank you note, a gift card, and a giant cow. Once pictures were taken and the laughter subsided in our respective homes around the country, we all compared gifts on the team Facebook page.

While I don’t know what the others did with their unexpected family addition, my cow became a mascot in my home office. A daily reminder of why we work so hard as a virtual team to launch books and support leaders, and how blessed I am to be able to be able to do work I enjoy, from home… with an enormous stuffed cow close at hand.

If you’re wondering, “Why the cow story?” Well, half of today’s featured team cannot be talked about without associating that cow with him.

Do those names ring any bells? You might have heard of them. If you asked them what they do, one would probably say he’s written a few books over the years, while the other would quip that he sells chicken. 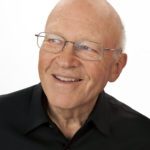 Ken Blanchard has written more than “a few” books – at last count it was more than 30! Ken is the “Chief Spiritual Officer” at The Ken Blanchard Companies. In 1979, Ken and his wife Margie started their own management consulting business, which eventually grew to employ more than 300 people, with offices around the world. In 1982, Ken co-wrote The One Minute Manager which sold over 13 million copies and has appeared on business best seller lists for more than 2 decades.

In 2004, Ken teamed up with Mark Miller to co-author The Secret: What Great Leaders Know and Do. 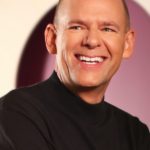 Mark Miller began working as an hourly team member with Chick-fil-A in 1977. He joined the corporate staff a year later, starting in the warehouse and mailroom, then working his way up through the leadership levels in Corporate Communications, Field Operations, Quality and Customer Satisfaction, and Training and Development. Today he serves as the Vice President for Organizational Effectiveness, and has written three more books based off of the characters found in The Secret.

Our team is joining with Ken and Mark to celebrate the September 2nd release of the 10th Anniversary Edition of The Secret, and we’d love for you to join us! There are lots of ways to be involved in the launch of this book, including joining Ken and Mark for a FREE webinar, hosted by Becky Robinson. If you don’t have plans, join them on September 29 at 2 pm (ET) to learn more from these two great leaders. Sign up today!

Also, take a moment to check out the resources found on the book’s NEW website, and start spreading the word through your social media channels. Do you have a Pinterest account? You can pin images directly from the website, which means anyone who clicks through to them will also be able to learn more about the book. It’s a win-win!