Have you ever picked a book that wasn’t in line with your normal reading tastes – whether it was by choice or by assignment in school – and been totally surprised when you got to the end and you actually enjoyed it? I’ve had that happen a few times in my life (along with the opposite – picking a book I thought I would love, only to be terribly disappointed), and it’s always a pleasant feeling.

Several members of the Weaving Influence team were surprised in a similar way when they read The New Confessions of an Economic Hit Man in preparation for the launch this week. Government conspiracy and international intrigue aren’t the book topics of choice for most of us during our off hours, but each person who read it talked about how it sucked them in and surprised them because it wasn’t a book they would have picked up otherwise. Personally, I’d say that’s a pretty good recommendation for giving it a try, wouldn’t you?

And with that, let’s meet the author! 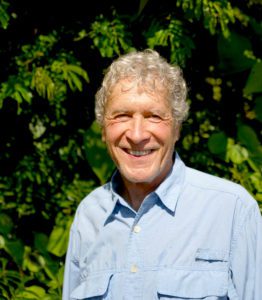 John Perkins: Economist/author/activist. John’s books have sold over a million copies, spent more than 70 weeks on the New York Times bestseller lists, and are published in more than 30 languages. As Chief Economist at a major consulting firm, his experiences advising the World Bank, UN, IMF, U.S. government, Fortune 500 corporations, and heads of state convinced him to devote his life to facilitating changes in social, political, and economic systems, as well as in general consciousness.

He was founder and CEO of a highly successful alternative energy company and is a founder and board member of Dream Change and The Pachamama Alliance, nonprofits dedicated to creating a sustainable, just, peaceful, and thriving world.

John has lectured at universities around the world, and is the author of books on economics, indigenous cultures, and transformation, including The New Confessions of an Economic Hit Man, The Secret History of the American Empire, Hoodwinked, Confessions of an Economic Hit Man, Shapeshifting, The World Is As You Dream It, Psychonavigation, Spirit of the Shuar, and The Stress-Free Habit.

He has been featured on ABC, NBC, CNN, NPR, A&E, the History Channel, Time, The New York Times, The Washington Post, Cosmopolitan, Elle, Der Spiegel, and many other publications, and in numerous documentaries including The End of Poverty?, Zeitgeist Addendum, and Apology of an Economic Hit Man. He was awarded the Lennon Ono Grant for Peace 2012, and Rainforest Action Network Challenging Business As Usual Award, 2006.

Connect with John on Social

Discover The New Confessions of an Economic Hit Man

“When I read Confessions of an Economic Hit Man, I could not have known that, some years later, I would be on the receiving end of the type of ‘economic hit’ that Perkins so vividly narrated. The New Confessions resonates with my experiences of the brutish methods and gross economic irrationality guiding powerful institutions in their bid to undermine democratic control over economic power. Perkins has, once again, made a substantial contribution to a world that needs whistle-blowers to open its eyes to the true sources of political, social, and economic power.”
—Yanis Varoufakis, former Minister of Finance, Greece

Shocking Bestseller: The original version of this astonishing tell-all book spent 73 weeks on the New York Times bestseller list, has sold more than 1.25 million copies, and has been translated into 32 languages.

New Revelations: Featuring 15 explosive new chapters, this expanded edition of Perkins’s classic bestseller brings the story of economic hit men (EHMs) up to date and, chillingly, home to the US. Over40 percent of the book is new, including chapters identifying today’s EHMs and a detailed chronology extensively documenting EHM activity since the first edition was published in 2004.

Former economic hit man John Perkins shares new details about the ways he and others cheated countries around the globe out of trillions of dollars. Then he reveals how the deadly EHM cancer he helped create has spread far more widely and deeply than ever in the US and everywhere else—to become the dominant system of business, government, and society today. Finally, he gives an insider view of what we each can do to change it. 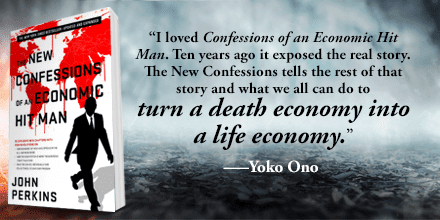