Warning: I am going to take a view about the recent Delta situation that will likely be unpopular.

In fact, I asked my husband to read this piece in its first draft and he told me it sounded like it was written by a Delta employee. “But I’m not,” I protested (he already knew that.) You do, too, right? In case there is any confusion, I don’t have any professional connection to Delta Airlines.

So I am going to start by saying a few things. My father is a retired army officer. My brother is an active duty army officer who has served for nearly 25 years.

I first saw the video from the soldiers yesterday morning. I empathized with their perspective.

I agree with the majority of Americans who are saying that service men and women deserve special accommodations and deference.

I stood in the kitchen with my husband, lamenting Delta’s failure in customer service and leadership. I probably thought and said a lot of the things you have thought and said.

I started thinking about blog post topics to respond to the situation.

Then I did what I do. I started taking a look at Delta’s social media response.

Then last night, I saw this tweet in my mentions column:

While she and I talked via DM, I did some sleuthing and found a few things, including this tweet:

Make sure you note the date on the tweet – May 4th.

For me, the tweet above tells the story of how and why Delta will recover from their current customer service nightmare.

Social media channels —which, ironically, created this firestorm for Delta — will also be the exit door for Delta, allowing the airline’s employees (including Rachael R.) to improve  interaction with customers by employing the same strategies that they’ve been using all along.

Back in April, Delta got rave reviews for their social media interaction on this blog. Recent tweets from Delta’s two official Twitter accounts give an even broader picture of the organization’s accessibility and responsiveness with customers. Check out the profiles of these two accounts: 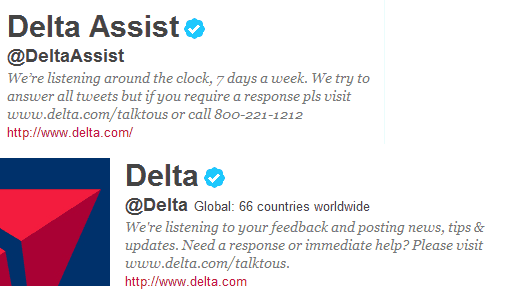 Do you see what I see?

Delta’s overarching message is that they are listening!

In fact, they want you to believe that they are listening all the time.

If you read their tweets, you’ll know that what they say is true. They are listening. Recent tweets both Twitter accounts are all replies to people, responses to complaints and concerns.

What I most love about the responses is that many of them end in initials; while we always know someone has to be behind the avatar, these folks are identifying themselves as real people by replying with their personal signatures.

This is significant because Delta is empowering employees to interact as real people.

Many corporate blogs shy away from allowing the personalities of their bloggers to shine through, maintaining a professional distance more appropriate to press releases than blogs.

Rachael R. humanized Delta by sharing the story behind the story, allowing people to see that she represents a company that cares about connecting and helping. (If you’re still not convinced, read the Twitter stream from @DeltaAssist or check out Delta’s Facebook page.)

The real value of any interaction through social media channels is the real connections and engagement that happen. As Rachael herself highlights in the tweet above, the real ROI of social media (and not just for Delta) is engagement.

Delta has been doing social media right for a long time. As an organization and as individuals (Rachael R. is a great example) they get the real value of social media.

Yes, Delta made a major misstep with their customer service in relation to the soldiers returning from Afghanistan Tuesday.  A very public mistake with very passionate public outcry.

AND Delta made it right, quickly, decisively, with humanity and grace. Their actions, not a knee-jerk play for positive press, are in line with an already-established track record of listening and engaging through social media.

Well done, Delta. And well done, Rachael R. and the rest of the social media team at Delta.

Tell me something! What do you think of Delta’s social media response? What other corporations have you observed that “get” social media?