I’m Not the Only One Listening 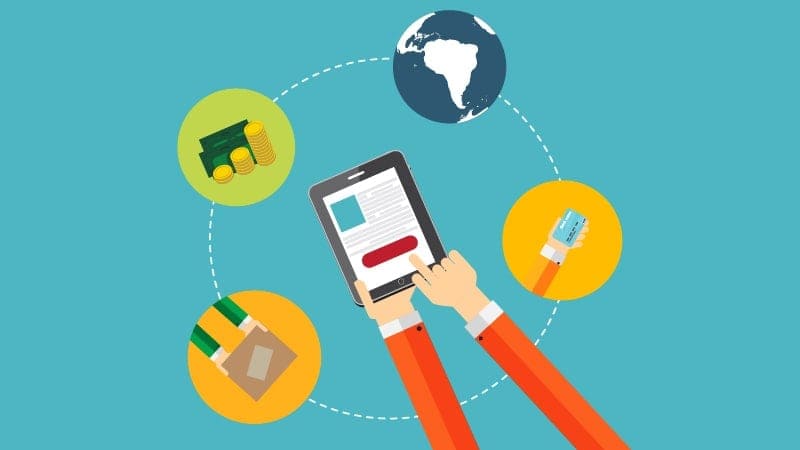 I’ve written a lot about my enthusiasm for Twitter. So, this morning, when a Facebook friend— his name is Brian— posted a link to his brand new blog, I asked him if he uses Twitter.

His response: “I’m on Twitter, but it’s completely useless as a promotion tool! Twitter = Everyone speaking, no one listening!”

Before we go any  further, let me tell you that I don’t know Brian well. We’ve never met but we have a lot of mutual friends. I know he likes pizza, he has a cat, and he’s a comedian…a good one, probably. His posts on Facebook make me laugh.

But I had a strong reaction to Brian’s comment, and not because I haven’t heard similar themes, even in my own home. My husband wouldn’t call Twitter useless, although he does admit he thinks there is very little use for it. But he has a sense of humor, too, and he sends me cool links to great stuff other people are saying about it. 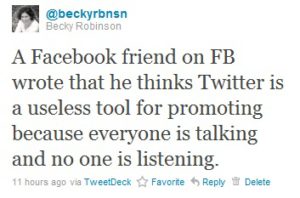 And then, just to show where I stand, I tweeted this:

Within a few minutes,  several people replied to my tweets. You know why?

Because they were listening.

Kip, Paul, and Dean were listening. So was Stephen — he even started a long conversation with me, sharing his thoughts and experiences with Twitter.

So why the disconnect for Brian? Why has his experience on Twitter been so different from mine?

I wonder if his lack of enthusiasm is related to a learning curve: it takes time to find community on Twitter. Perhaps he is not following (or being followed by) people who share his interests. Or, maybe he was looking for a magic bullet, a fast and easy way to promote his stuff.

I’m not sure if it matters.

I have some great friends on Twitter. I can introduce you to them.

They tweet a lot, but they also listen plenty.

Tell me something! Do you use Twitter? Love it? Hate it? What would you say to Brian about Twitter?

If you want to learn more about Twitter, check out this white paper  that I wrote: Twitter for Beginners. I wrote it when I was a beginner, but I’m pretty sure that most of the stuff in it still applies.