I’ve been on Facebook since July of 2007, which means I have gone through several changes to their layout, and been part of the crowd who cried, “Not again!” each time something changed. Despite my five years of using Facebook, it was only after I started working with Weaving Influence that I discovered some pretty nifty tools that I had been missing!

My favorite feature of Facebook is the ability to schedule posts when I am “unplugged” from the internet. Sadly, it’s not possible to schedule posts on your personal page (at least, not yet), but if you have a business page and you are not using the scheduling feature, here is a short tutorial that will help make your life (on Facebook) so much easier.

{Becky doesn’t know it, but I’m using her page as my example – thanks, Becky!}

1) Like many people, Becky plans to take the week off between Christmas and New Years. However, Becky might not want to go totally dark on her Weaving Influence Facebook page, so she comes up with some links, graphics, and status updates that will go out automatically, while she is offline – enjoying the holidays with her family.

2) Becky creates a status and schedules it using the “Schedule” clock icon in the bottom left corner.

3) She decides that she wants it to be sent out on December 27th at 1:10 PM, and clicks the “Schedule” button to confirm.

4) After she schedules the post, she decides to look at her Activity Log to make sure that she’s happy with the order of the posts she has set up.

5) When she views her Activity Log, Becky can see – at a glance – all of the posts that she has scheduled to go out the week of Christmas. 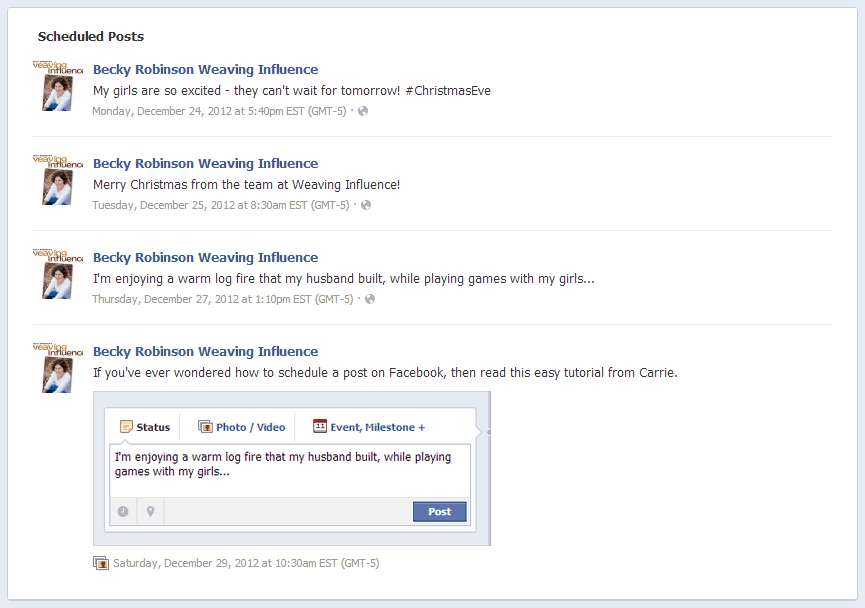 6) If she decides that she wants to change a time or date or delete a post completely, she can do so by hovering over the top right of the post until an arrow appears. Using the drop down box, she can select “Change Time”, “Publish Now”, or “Delete Post”, to rearrange the posting pattern.

And there you have it, a simple overview of a Facebook tool that can save you a lot of time in the long run. In just a few minutes, Becky can set up a weeks worth of Facebook posts, allowing her to unplug and enjoy her time off. While she’s sipping her mocha by the fire, watching her girls open their gifts, updates are still going out on Facebook, helping to grow her business for 2013.

You tell me! What Facebook (or other social media) tool do you find to be the most helpful?