Taking on the Influencer Myth 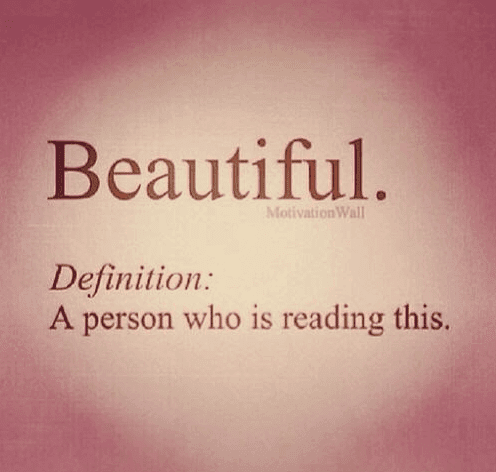 Today’s guest post comes from Charlotte Ashlock. She shares a lot of wisdom here, well worth your time to read! Thanks, Charlotte!

The Influencer Myth, Part One:  Getting the attention of an influential celebrity is the recipe for instant fame (no hard work necessary!)  I keep reading blogs for social media beginners that tell them to “court influencers.”   The blogs promise this is the quickest, most efficient way to achieve social media success.

The advice goes like this: when people see the famous folks talking to you, they’ll start following you in swarms! You will magically soar to join the ranks of the high and mighty.  All your discoverability problems will be solved.  There’s only one problem with this advice: it couldn’t be more wrong.

I’ve talked to celebrities on Twitter a few times now, and I’ve carefully monitored my follower count after each one of those conversations.  My conclusion?  I’ve never had a celebrity conversation that perceptibly moves the needle.  The effect on my follower count is not just low, but nil.

The Influencer Myth, Part Two:  The best way to get celebrity attention is to barrage them with compliments.  I write many tweets that include celebrity handles, because I want my Twitter friends to follow and admire the same people that I look up to.  Given that this is my purpose, the vast majority of my tweets @ celebrities are complimentary.

Having the celebrity tweet back is not all that common, but it happens sometimes.  Study my four “celebrity encounters” and see if you notice any common elements between them.

ELIZABETH GILBERT is the best-selling author of Eat, Pray, Love.  (If you’ve never seen her inspirational TED talk on the nature of genius, I highly recommend it.) 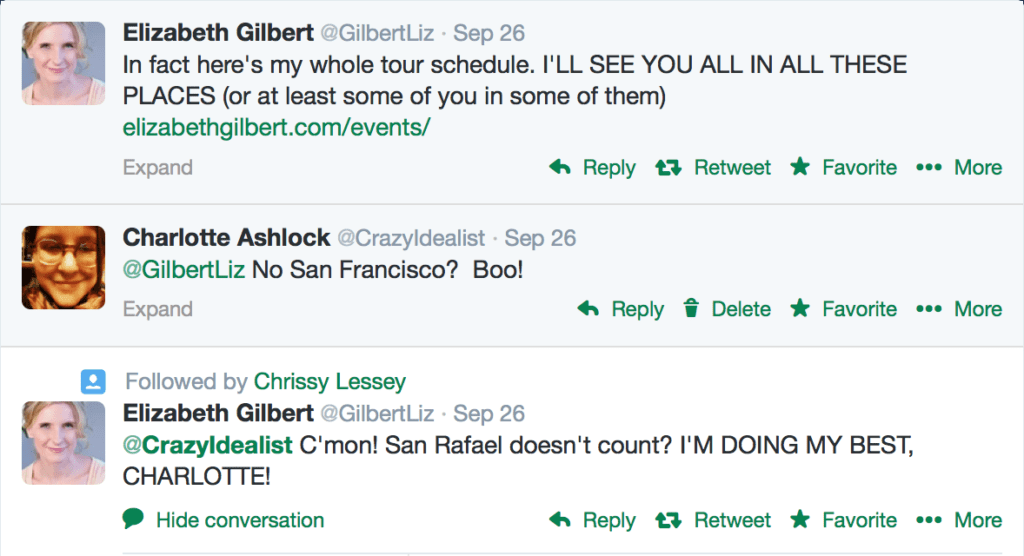 JON MORROW is like the Stephen Hawking of blogging— he’s had tremendous professional success despite suffering from a disabling disease.  I’m a huge fan of his writing, so I’ve made many complimentary tweets about his articles.  However, this is the only time he’s ever replied to me: 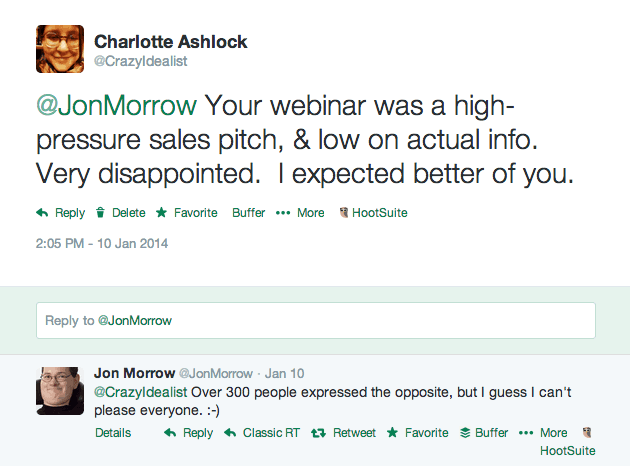 MARGARET ATWOOD is a famous dystopian feminist Canadian fiction writer.  She also happened to be the commencement speaker at my college graduation. 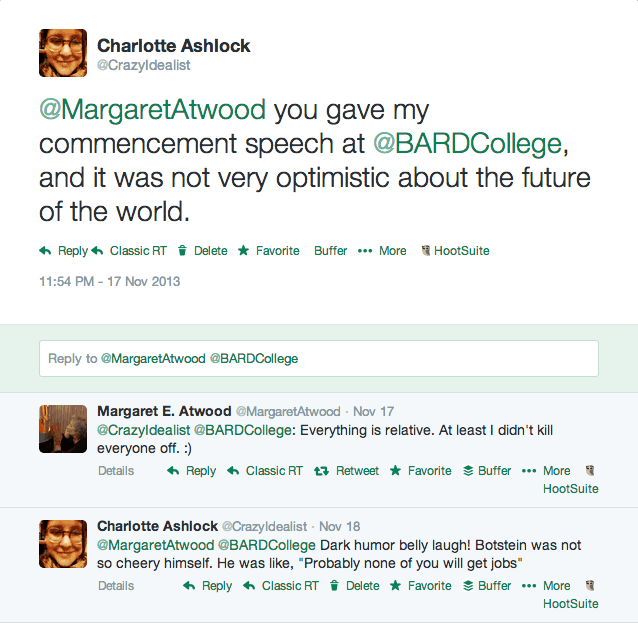 (Lest you think I am being too hard on Margaret, she told us we should prepare for a future of total climate disaster with “the haves warring against the have-nots.” Then our college president Leon Botstein took the podium and told us nobody would want our liberal arts degrees in the bad economy.  Thankfully, the college provided bottles of free wine to help us wash down the bad news.

PBS IDEA CHANNEL is a YouTube show with over 500,000 subscribers that examines the connections between pop culture, technology and art.  The host is quite witty and insightful, and will analyze everything from Jurassic Park to zombies, with the thoughtfulness of a brilliant English major analyzing Shakespeare. 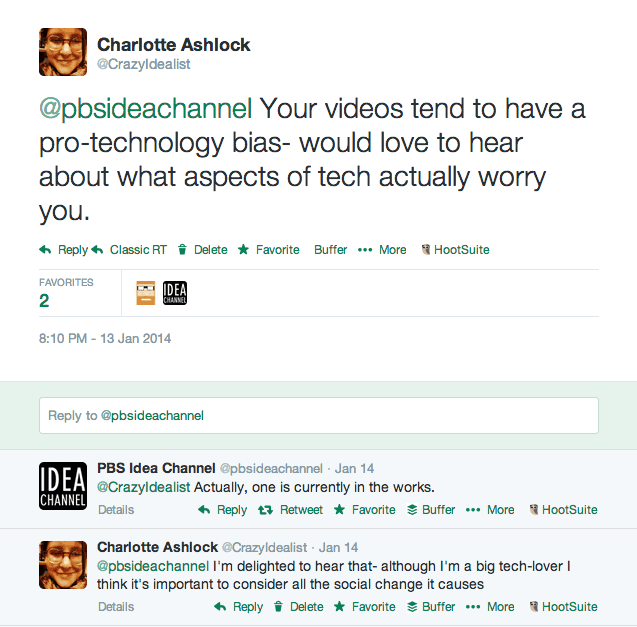 PBS Idea Channel is famous in the YouTube community for the thoughtful way it engages subscribers, and loves to put audience comments up on the screen.  So when it released the episode we were chatting about, it put my tweet up on the screen in big letters!   The episode is about the Internet’s dark side— the experience of being trolled—  and my tweet is shown at the 7 minute and 24 second mark.

So what do all four “celebrity encounters” have in common?  In every single case, I was sharing not a compliment, but a criticism.  Respectful, thoughtful criticism tends to get a reply— whereas praise really won’t stand out from the wash of feedback the celebrities are receiving.

My coworker Jeevan uses the same strategy in his editorial work.  In the publishing industry, we frequently have situations where several publishing houses are competing to acquire a famous author’s book.  In those cases, Jeevan will send the bigwig, a frank, honest critique of their work— highlighting all the problems and flaws with their book.  The refreshing honesty catches the author’s attention, and more often than not, secures the deal for Berrett-Koehler Publishers.

Which brings me too….

Has the advice to “court influencers” ever come up in your “real” social life (outside of social media?)   I can almost guarantee it has—  and I can even tell you the time— high school.  In high school, my peers told me my best route to popularity was waiting attendance on the “popular” girls.  If I praised them and complimented them, they would embrace me in their circle of popularity.

I disdained this advice— because I could see it was, well, false.  The girls who sucked up to the popular girls didn’t become alphas themselves— they were betas.  Rather than play the game of social class in the context of high school, I just looked around for people who had common interests with me.

I looked for creative people, intelligent people, people who loved books.  I didn’t care whether they sat at the exulted cafeteria tables, or the humble ones.  I didn’t care if I was their only friend or if they had a hundred friends.  I couldn’t care less if they bore any of those markers of high school stigma: nerd, fat, wiccan, goth, weird, gay, you know the words.  I didn’t care if anyone made fun of me for hanging out with them.  The only thing I cared about was whether they treated me decently and had something interesting to say.

Which brings me to….

If I don’t get my Twitter followers by hobnobbing with the celebrities, how DO I get them?   I get my Twitter followers using exactly the same social strategy I used in high school.  I’m not re-inventing the wheel, I’m just using that same old personality I’ve always had.   I look for intelligent, creative, bookish people.  I play games of imagination, I engage in spirited debate, and I return kindness with kindness.  I’ve been embraced by many Twitter communities, most notably the indie author Twitter community— see my list of Creative Writers here.

Speaking of games of imagination: if you have some time next Friday, drop by our weekly Twitter microfiction party, it takes place on hashtag #FP (stands for Friday Phrases.)  Yes, stories CAN be written using only 140 characters, and some of them are pretty good.   (And by the way, I notice an increase in my follower count every time I participate in #FP.)

But follower count isn’t even the right thing to be watching.  Instead, you should ask yourself, “Am I furthering my personal and professional goals?  Am I having fun?  Do I love my new friends?”   And how do you accomplish these things?  The same way you’ve always accomplished them, with or without social media.   There is no right or wrong style.  There is only YOUR style—  or else you, trying to be something you’re not.

Trust me: there’s no need to pretend to be somebody you’re not.  Who you actually are is the most beautiful. 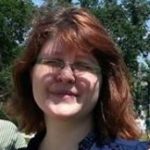 About the Author: Charlotte Ashlock is a Digital Producer and Editor for Berrett-Koehler Publishers, which produces nonfiction books about making better organizations, societies, and lives.   Say hi to her on Twitter, especially if you have ideas for the book you think Becky Robinson, founder of the Weaving Influence publicity company, should write.